Yesterday I've got a short message from Eric,

"The lighting effect is there!!" 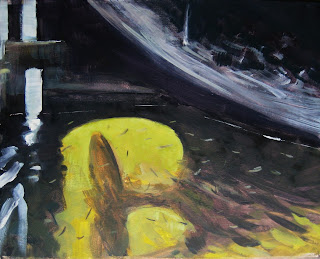 Don't know what it is, maybe I am hooked on painting
little pubs, ... they are soo cosy or even better 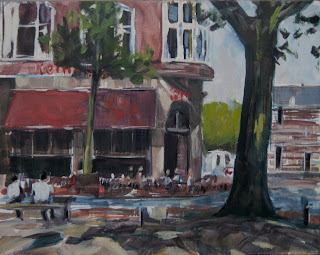 Don't think that I drink each time that I paint a pub!!
Geplaatst door René PleinAir op Monday, June 29, 2009 3 comments:
Email ThisBlogThis!Share to TwitterShare to FacebookShare to Pinterest

It's terrible here, the light is just like pea-soup,
soooo grey, there isn't any contrast what so ever! 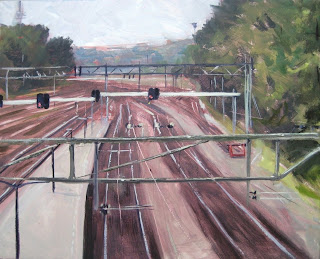 I didn't had much time today, so a little
sketch, lots of fun those little cafes! 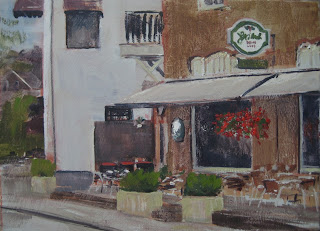 If you look carefully you can see some fishes swimming around. 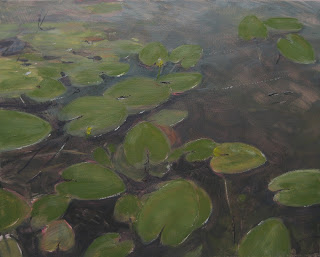 My first attempt to paint Erics boats propeller with rudder

We had a great laugh btw. because in Dutch a prop for a ship
just calls screw, ... so Titling this painting "Screw Eric"
was a bit too obvious.

Anyway it didn't turned out so well, the water wasn't so clear
as I expected and there was some wind on top of that. The first
time I saw this you could look clearly under the boat and even see
the other end of the rudder and the propeller as well very detailed.

We agreed to give it an other shot when everything looks better
I will get noticed by Eric by that time.

So here goes number I. 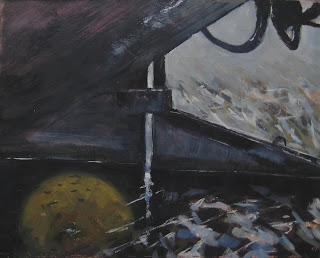 After a little repair job by my father, I had some
time left to paint this lovely black mill. 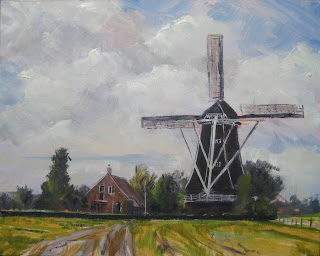 Sometimes you just have a little luck, ...
Today I had some, after looking around for quiet a while
I thought it doesn't gonna happen today, and I turned and
this is what I saw, ... lucky me! 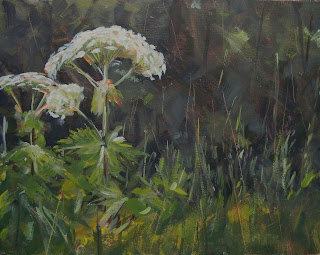 Today it was my self called "Morris-day" that means maintenance
on my old Morris Minor (build in 1968) It's turning out to a complete
restoration though, but I have time on my side so in shouldn't matter.

Luckily I made one more painting yesterday, near home.
Its a structure made during the cold war, and was mend to slow down
the USSR army when they should invade The Netherlands. The plan was
to block the Rhine, IJssel and so on to flood a huge area with an certain
level of water, ... not too much otherwise they could use boats, and not
to low otherwise vehicles could drive through. This is the inlet part of
the structure, you should imagine that there where many more along the river
so most part of The Netherland would be protected by it. 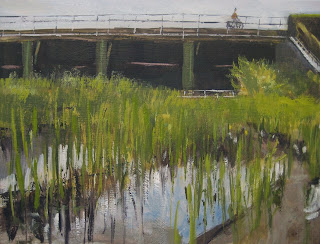 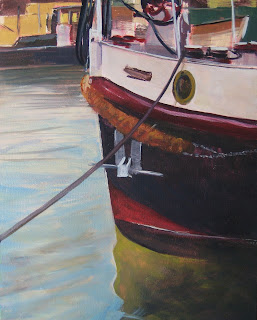 Also from yesterday, it was quite a struggle to push
the background back, it was not so far away you know.

the haziness helped a little, .. 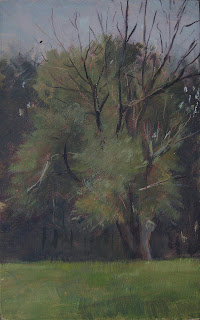 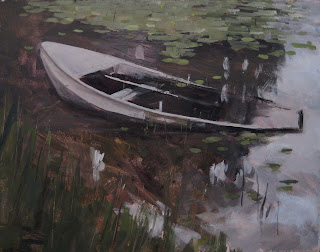 A leftover from last week, I thought I had
too tweak it so much, I saved it for the weekend.

I found this scene much too nice to sand it down, ... 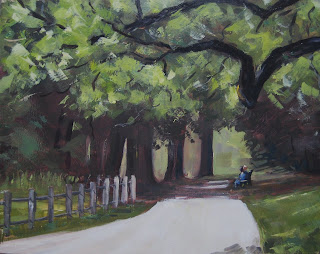 A great festival today in Doesburg an ancient city nearby
There was even a painting contest, but I didn't join
"I don't like competitions!"

Anyway a lovely day, nice weather lots of people to paint
and a great bike tour on top of it all. 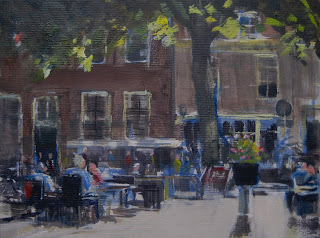 Here the link to their site:

This is a quick sketch of the first tree out of my hometown.
I think it doesn't going to stay that long, there are all kind
of buildings approaching. 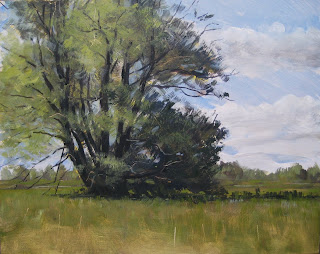 Kevin Menck did some what he called Class C demos lately and
this inspired me to give it a try also. 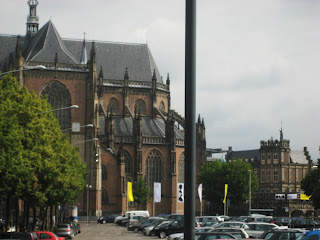 The main church in Arnhem, a big city near the town I life. 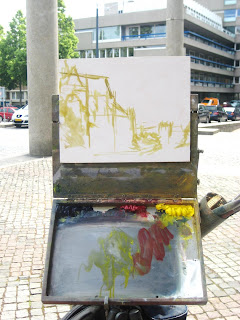 Detailed shot of my setup plus the initial sketch, .. 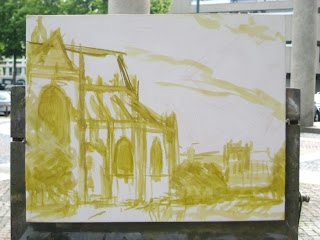 I sketch rather thin so it works a lot like watercolor even so good that you almost can make several layers. 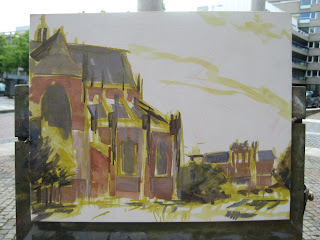 Because the church had such a prominent color I put that in first, .. 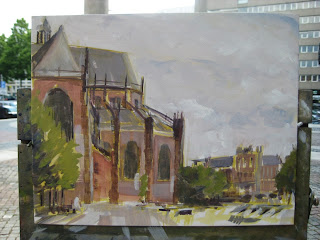 After that the sky and getting to the block-in or better working on the contrast, ... using a large brush. 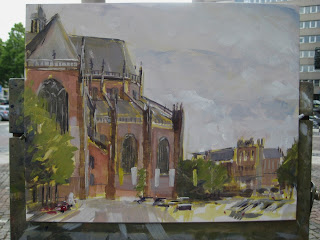 Getting into the detail more and more, using a palette knife as well in this stage. 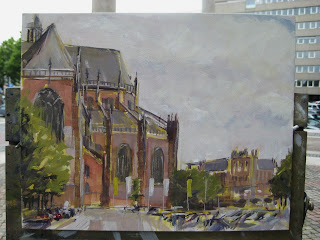 The final stage on location, when I feel the light has shifted soo much that
it's become an other painting I stop, and have a second look on it in my
studio. 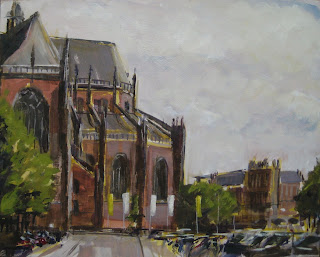 Here the finale result, notice I put in some more contrast to show the light
source a bit more and made the car park a lot darker so you look over it
much faster. I like the yellow sketch peaking through here and there, how I
can use it more often I don't know yet, maybe a sketch in bright red will have
a go soon as well.

So there you have it a w.i.p. from a cityscape, hope you liked it.
Geplaatst door René PleinAir op Thursday, June 11, 2009 6 comments:
Email ThisBlogThis!Share to TwitterShare to FacebookShare to Pinterest

Didn't had the chance to tell more over the project yesterday.
It's not much anyway because the guy I met told me that there
would be a website about this "project" but there isn't.

In short the "project" will be a learning process for young people
who are going to restore this old vessel. I think you will see
some more of the boat in the future because it will stay here for
at least one year. I am looking forward to see it grow and I reckon
I will paint it more.

Ow, btw. this is one of the other paintings I made yesterday as well. 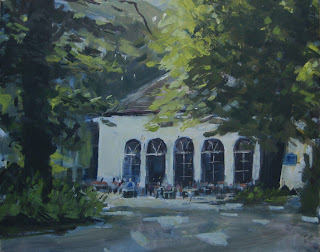 During this work Henk-Jan Winkeldermaat (from Punkmedia)
came by and made a photo of me in full action :-P 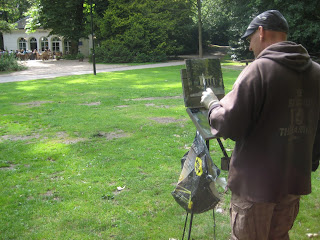 Just a quick upload, ... and I am off
for some more painting.

I will tell more about this project tonight. 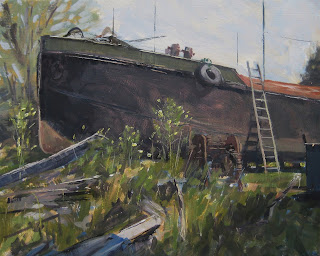 A lovely afternoon in my own hometown.
Although a bit tricky with all that green
and not much structural features I think
it was well worth painting. 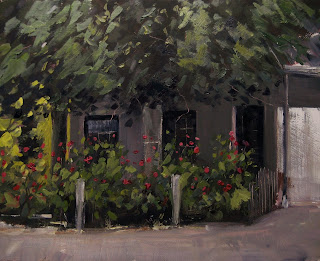 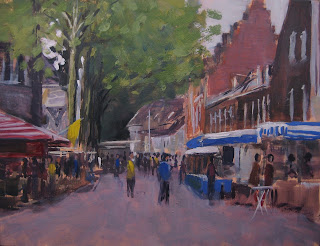 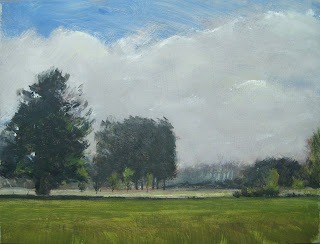 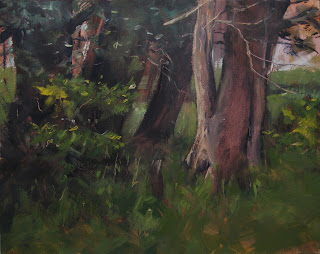