It's much too windy to setup my hole gear and paint, ..
so I tried a little watercolor, sheltered by a little building
just at the junction between the Rhine and IJssel here by my hometown.

I like watercolor, but I have so much to learn about it, and my setup for watercolor isn't that good either, ... but if you don't try, you don't learn! 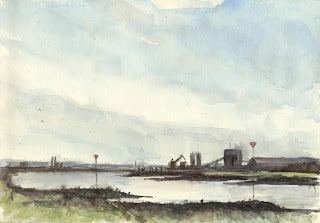 It was a dreadful day today, drizzle and rain the whole day.
Lucky me, .. I had an appointment with my dentist (two holes btw.)
And I starting to run out of boards, so a good day to stay inside and prepare for
the oncoming spring and summer.

I notice this older painting and when I looked it up on my pc. I discovered
that I never placed it, I think that was because of the poor photos I could
took then, ... with my new camera it's much better so here you go. 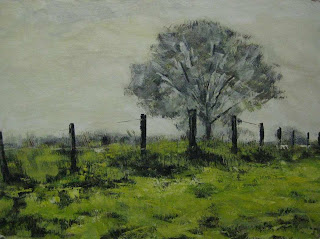 Again Doesburg, ... the first time I went there
I thought what a picturesque village this is, ... 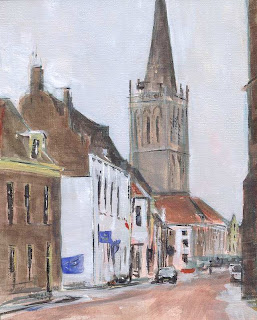 It's becoming spring somewhat, here and there you see snowdrops and Crocuses.
I find it hard to find a intimate scene here, I miss the sun, the leaves and
the Sun playing with shadows, .... 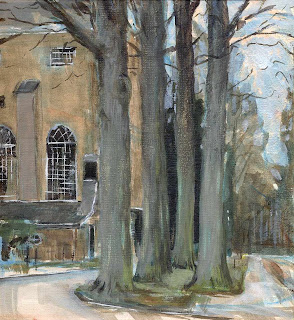 While cleaning up my studio this weekend I run into this
painting and had the idea that I never placed it on my blog
so here you go, ....

btw. my studio still isn't up and running yet, way toooo much
garbage. 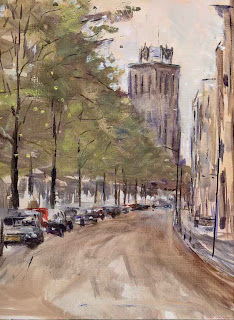 The new jacked I bought is a good one though, but after two
hours standing in the rain EVERY-thing turns wet. 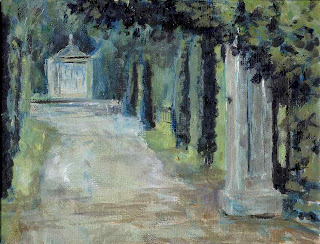 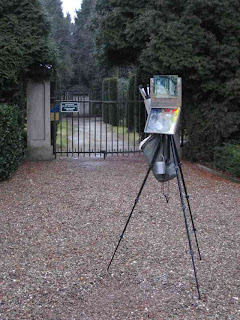 Rob ijbema has helped me a lot, by lending me his weblog
for trail mails, .. I couldn't get the emails setting right, ...

All the time I made a comment on his weblog, ... and it wasn't
that hard to do because it was fun to see that fun day again and again, ...

So I wanted to give it a bump up those lovely paintings we
and Seago made, together with some photo's and the story. 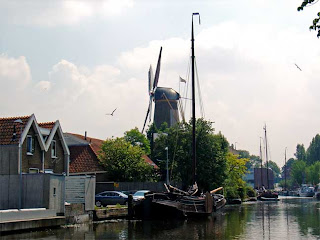 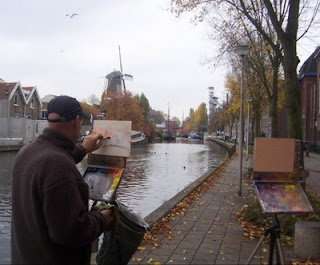 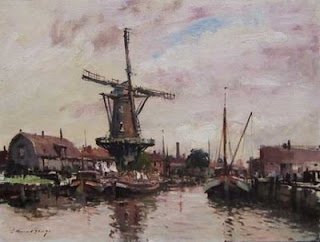 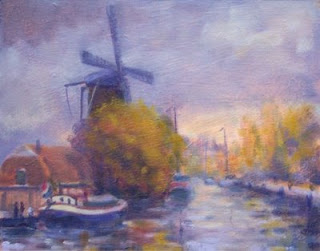 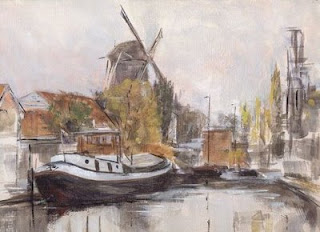 Rob, thanks again, not only for lending me your blog,
but also for this lovely memory.
Geplaatst door René PleinAir op Tuesday, January 22, 2008 3 comments:
Email ThisBlogThis!Share to TwitterShare to FacebookShare to Pinterest

An old new one. Holland.

last year I went to Milling with my bike and some larger
panels/boards with me. Then I just had my new camera and
didn't had discovered all the features yet, ....
Now that my scanner doesn't work on Vista I had to experiment
a bit more, and here you are, a new photo of this painting
from last December.

Again a huge one! (Sorry Rob) 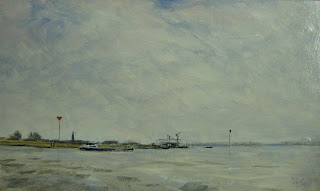 Wow, that went easy, ... although I haven't got an scanner anymore Vista knows a lot but it couldn't find my scanner, even when I waved it in front of my huge flat panel, ..... :-[

anyway I tried to get a VERY detailed photo of a painting with my camera,
maybe that's enough, ... 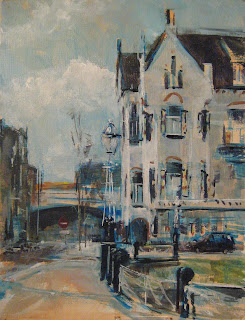 Today they delivered our new computer!
With a huge 22" screen, .. hope not that this gonna
give serious neck injuries, .... :-P
I am gonna try to get thing running asap, .. but on the
other hand take my time to install everything nice and clean.
So no idea how long it will take, ... 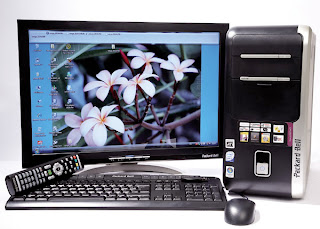 Wow, I am tired from the bike-tours of the last couple days.
So I stayed close at home, .. Arnhem.

A dull morning, that's what I call this morning. 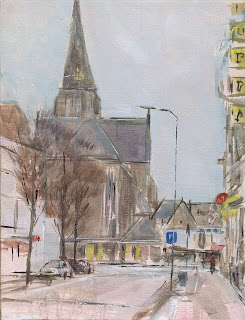 It was quite windy today, so windy in fact that my whole set up
blown over! I lost my turp that way and had to buy some Turpentine.

What an ugly stuff that is, .. smelly to.
But any way it gives me the change to paint this little scene. 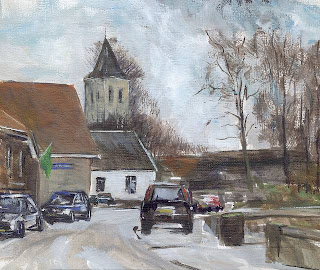 Rain rain rain and then heavy wind and some rain.
So that's enough of that, I was way to excited yesterday to
keep me inside, ... so I had to give it an other try.
My new color, ... I guess I should call it "magic-blue", and
Ultramarine "wonder-blue". 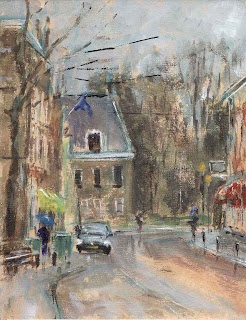 I've got my new Blue! Holland.

I experimented a little with a new color (for me that is)
Phthalo blue, ... and I like it a lot!
Not that it is just it, I have to get used to the strongness of this color.
It's a lot stronger than the cobalt blue I used normally. 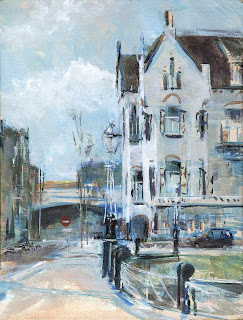 It a complexed building, ... I had to smile a little
before I got started because it felt like a huge challenge. 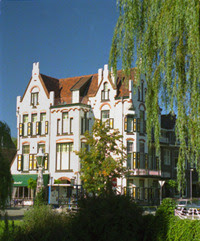 I hope I pulled it off, ... what do you think?
Geplaatst door René PleinAir op Monday, January 14, 2008 7 comments:
Email ThisBlogThis!Share to TwitterShare to FacebookShare to Pinterest

Just before the weekend is starting and the weather turns
ugly I got this little painting done in the main street
of the oldest section of my town. 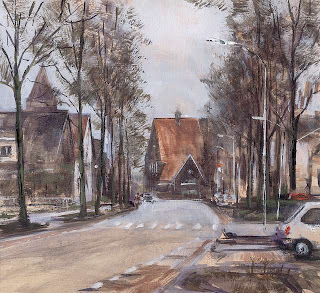 I wanted to paint this house earlier but that was last spring I
thought it would be more beautifuler when painted "contré Jour"
with a low Sun and yesterday I had the mood for it.

I found the white building against the even whiter sky hard to paint
although I was great to see. 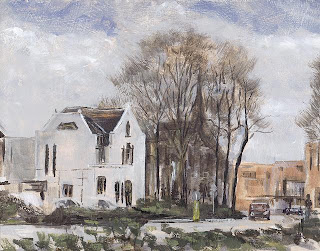 There is even a photo from this building and also a site! 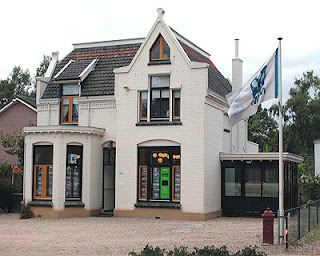 It's a bit hard to get going in the same spot, ...
after some great days in Driebergen, Amersfoort and Doorn.
aah well my time will come I reckon, when only the weather
had some more guts, ... that grey is just, ... grey.

Here My effort from yesterday, I tuned it a bit up with my
new digital camera, for example the white bars on the building
on the right, .... 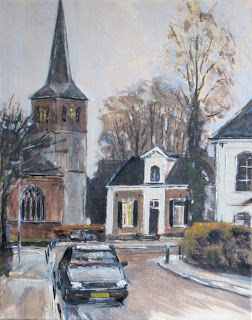 With my digital I can make also some nice setup shots! 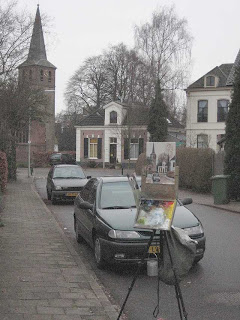 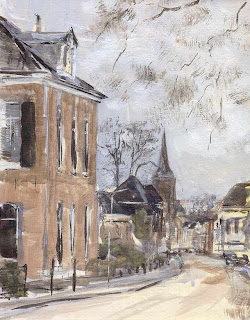 One of my plans this year is to get away more.
I mean by bus or train, to some city's in Holland.
There are so much beautiful ones here, ....

Today I did just that, a bit of a trial though see how things
going, what to take with me, how things turn out in that town
and so on. Plein air isn't just setup your gear and paint, is
80% looking maybe more, ... to find just that one spot that inspires. 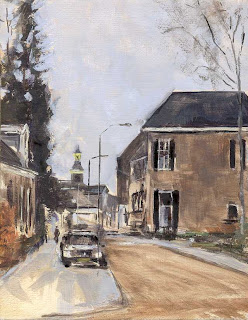 An other from the my days of with my girlfriend.
We went to Amerfoort together, and she went shopping so
that I could paint least one painting of this lovely old
town. 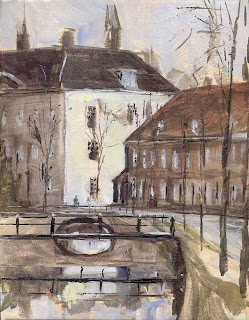 btw. I've been tagged (again) by Luis Colan an artist for New York. It was quite a surprise but looking at his blog he make marvelous watercolors with a very loose style and great sense of abstractness. But his still life paintings are just awesome, a visit well worth!! Since I been tagged again now, I decided that I am not gonna tag anyone anymore. I do gonna point out 5 artist that I admire a lot, and tell 5 possible new stuff about myself.
So here we go:

1. Marc Hanson: Every time I see a painting from his hand, a funny feeling creeps up to me that I better can stop painting, ... it's soooo well done and now that he has a weblog also you even can see his work in such a detail. A great treat for everybody who likes paintings or paint.

2. Larry Seiler: Although I never met him in person, only by his postings and comments at WetCanvas, I think he is the kindest person living on Internet, .. the way he take the time to answer all peoples questions and tell about himself sometimes in comments makes him such a real person. I consider him a good friend with a very great heart of gold! His work is just unbelievable not only by looking at it but also the paintings on You-tube or on Wetcanvas teach so much about painting.

3.Judith Nijholt-Strong: Again ;-P
A American living here in Holland, and tells all kinds of stories about the Dutch customs and behaviours. Also I want to put her a so called "Hart onder de riem." because she lost a dear friends last year, and it's hard to blog with this lost. I hope she gets it going anyhow, her weblog is much fun to read, and accompanied with lovely drawings from her hand.

4.Sally Chupick: I discovered her last year, and admire her work a lot. She's got a sense of seeing stuff just a little different than I do. Hard to describe but a bit abstractness and an other sens of color that I find very appealing.

5.Pol Skardenni: Although Pól doesn't post often what he post is just awesome. You have to admire his work made in that region of our world! With all the wind and coldness he managed to paint soo large and soo well, it's just like being there, in that unbelievable beautiful spot on earth.

1. I am addicted to "hagelslag" and I am NOT gonna tell what that is!!
Maybe Judith will someday. The one thing that I say is that it's edible.

2. The most part of wardrobe is quite the same. Most of my sweater for example are
made by my girlfriend. I usually buy more of the same trousers, so that I don't have to buy them for a long time, ... again. The same for my socks, they are black army socks for as long as I can remember.

3.During those day's that they broad-casted it, I was a huge fan of "star trek"
It didn't matter how often I had watched a episode I had to watch it again, ....
pity it's not so much on TV anymore, ... not on the Dutch one but also not on the foreign either.

I am back!! after some great days.
First of all, I wish everybody who's visiting my blog
regular a very good and healthy 2008!

This painting was the very last painting in 2007,
an evening painting, almost a nocturnal one made
in Doorn a little town near the place where we stayed. 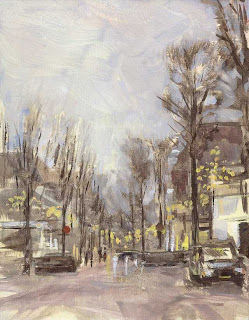