"Behind the blue doors." Doesburg, Holland.

Today it was almost impossible to get a good painting,
I had a good starting point though, behind two blue doors
one of them was open and I noticed a lovely wall, so I fetched
my view-catcher to see if it would look like a nice subject.
A lady came outside to ask what I was doing and she told
that there was a lovely tower at the other end of the building
I had a look but decided to stick with the wall, but viewed
from the other side. During the session it rained several times
it hailed two times, and although I closed my pochade to shelter
the painting I couldn't stop the Sun so the whole scene changed
too much in the end, ... 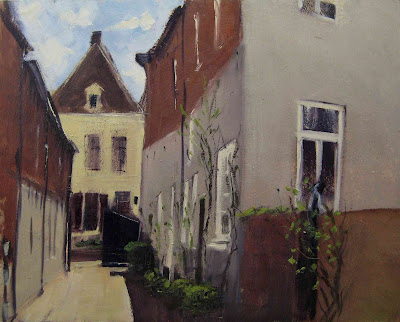 It sounds like a nightmare, with the weather and all those changing shadows. You did well to get a painting out of it.

You have some wonderful paintings on your blog. I'm looking forward to seeing your future pieces.

I love the subtle reds in this, a beautiful painting 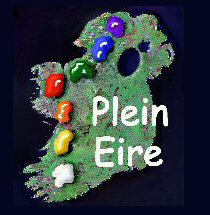